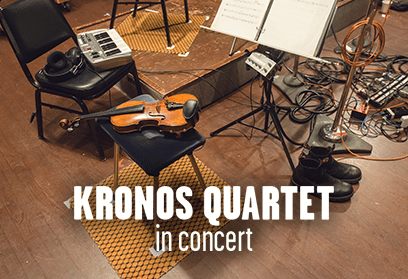 To celebrate the 85th birthday of Philip Glass, one of the most innovative and prolific musical voices of our time, Rockefeller Center and Pomegranate Arts will present a concert featuring performances by longtime Glass interpreters, the Kronos Quartet and electronic composer Jlin, at the Rainbow Room at
Rockefeller Center on Friday October 28th at 7:30 PM and 9:30 PM.

The compositional style of Philip Glass, which he prefers to describe as “music with repetitive structures,” has redefined how the world perceives classical music. Through his over six-decades long career, Glass and his music have inspired a multitude of diverse and often surprising collaborations and interpretations across musical genres and artistic forms, which reflect the ripple effect which his music has made on our collective aural landscape.

Featuring re-imaginings of Philip Glass compositions, and music Jlin has written for Kronos, Glass Reimagined will highlight how Glass’s compositions can be played, reimagined, extrapolated, and
interpreted. The program will include new arrangements of Glass piano etudes commissioned for Kronos Quartet by composers Brian Carpenter and Aftab Darvishi; “Little Black Book,” a recent work for quartet written by Jlin as part of Kronos’ Fifty for the Future initiative; as well as new electronic music inspired by Glass’s music by Jlin. This will be Jlin’s first performance honoring the composer who has served as a continual source of inspiration.