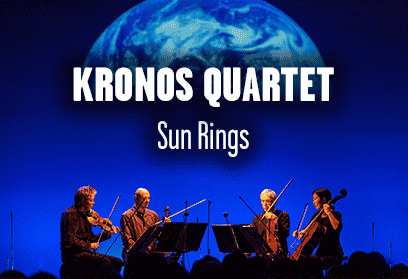 Premiering in 2002, the “mystical, musical, scientific, philosophical, and spiritual voyage” (Knoxville News Sentinel) of Sun Rings is one of Terry Riley and Kronos Quartet’s most ambitious projects of their 35 years collaborating together. A ten-movement suite commissioned in part by NASA to commemorate the 25th anniversary of the Voyager Planetary Mission launches, Sun Rings weaves together string quartet, choir, and the sounds of space – sonifications of the data recorded by plasma wave receivers flown on the Voyagers and a variety of other American spacecraft – with Willie WIliams’ dramatic visual design. As this audio-visual journey moves through one cosmic sphere after another, it transcends the exploratory mission of Voyager to encapsulate the probes’ selfless spirit as represented by the famous Golden Record each carried – or, in the words of Carl Sagan: “a hopeful, and optimistic gesture.” In August 2019, Kronos’ longtime label Nonesuch Records released the first complete recording of Sun Rings.

“You are awe-struck by the shrieks, roars and sibilant explosions that Riley and his sound designer Mark Grey have collected and organized from the NASA recordings, while whirling images of Earth and Mars and the volatile close-ups of the Sun are both frightening and fascinating.” – New York Times

“Perfect for meditation on the infinite… Think of Sun Rings as a spaceship that faces ahead into the planets but also looks back toward its starting point on Earth.” – Musical America

Sounds sourced courtesy of Dr. Donald A. Gurnett, Dept. of Physics and Astronomy, University of Iowa

Sun Rings was commissioned for the Kronos Quartet by the NASA Art Program, the National Endowment for the Arts, The Rockefeller Foundation’s Multi-Arts Production Fund, Hancher Auditorium/University of Iowa, Society for the Performing Arts, Eclectic Orange Festival/Philharmonic Society of Orange County, SFJAZZ, Barbican, London, U.K., University of Texas Performing Arts Center, Austin (with the support of the Topfer Endowment for Performing Arts), and the Brooklyn Academy of Music. Additional contributions from Stephen K. Cassidy, Margaret Lyon, Greg G. Minshall, and David A. and Evelyne T. Lennette made this work possible.