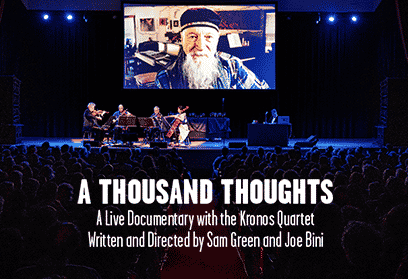 Together on stage, Green and Kronos interact with the stirring cinematic imagery on screen to craft an important record and exploration of late 20th– and early 21st–century music. As Green tells the multi-decade and continent-spanning story of the groundbreaking string quartet, Kronos revisits its extensive body of work, performing music by George Crumb, Laurie Anderson, John Zorn, Aleksandra Vrebalov and many others. Transcending the typical live music and film event, this collaboration quickly becomes a meditation on music itself – the act of listening to it closely, the experience of feeling it deeply, and the power that it has to change the world.

Presented by the 21C Music Festival, in partnership with the Hot Docs Ted Rogers Cinema as part of the Music on Film series.

CREDIT
A Thousand Thoughts was commissioned by The Arts Center at NYU Abu Dhabi, Barbican, Center for the Art of Performance at UCLA, Exploratorium, Christos V. Konstantakopoulos, Krannert Center for the Performing Arts at the University of Illinois at Urbana-Champaign, MASS MoCA, Melbourne Festival, Wexner Center for the Arts at The Ohio State University through its Wexner Center Artist Residency Award program. Additional support was received from The DrumStick Fund, Genuine Article Pictures, JustFilms/Ford Foundation, Lear Family Foundation, Andrea Lunsford, The National Endowment for the Arts, Sundance Documentary Film Program with support from Open Society Foundation, Gottfried and Janet Tittiger, and Kenneth and Elizabeth Whitney. This film was supported by Sundance Catalyst.