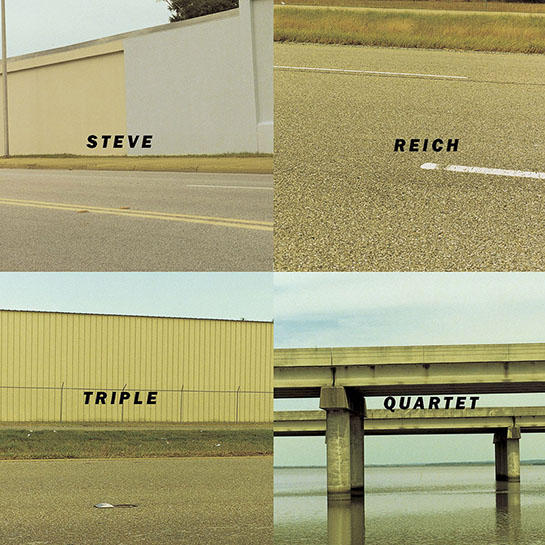 “With an oppressed and often overwhelmingly dissonant sound, Reich’s quartet is one of his more haunting compositions. Following the three movements’ unyielding progression, Kronos attacks the intricate piece with an energy that does not cease until sometime after the final notes are played… With Triple Quartet, Nonesuch Records offers a brief glimpse at the composer’s career at it’s beginning, middle, and present – which is far from its conclusion… This crisp recording offers some of the best of Reich’s work to introduce a first time listener, but it also accentuates undertones and thoughts perhaps not realized before for veteran enthusiasts.”

The world premiere recording of Steve Reich’s Triple Quartet by Kronos Quartet is accompanied by additional works by the New York-based composer: Electric Guitar Phase performed by guitarist Dominic Frasca, a revised edition of Music for Large Ensemble performed by Sound and Ossia, and Tokyo/Vermont Counterpoint performed by Mika Yoshida on a MIDI marimba (KAT controller).

Triple Quartet (1999) is a three-movement work written for three string quartets, and exists in three versions for performance: one for string quartet and pre-recorded tape, another for three string quartets (12 players) and the third for part of an orchestral string section of 36 players. On this recording Kronos pre-recorded quartets two and three and played the quartet one part along with the tape, as they do in live performance. According to Reich, the initial inspiration for the piece came from the last movement of Bartók’s Fourth Quartet. While working on the piece, he heard the music of Alfred Schnittke for the first time, specifically his string quartets, which deeply affected his writing, as did Michael Gordon’s Yo Shakespeare. Reich says, “the piece became considerably more dissonant and expressionistic than expected,” as a result of these influences.