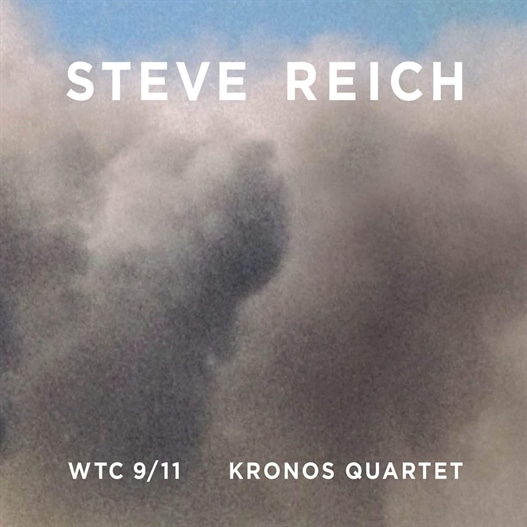 “WTC 9/11 is Reich’s concise memorial to the World Trade Centre atrocity. It incorporates recordings of messages from air-traffic controllers, radio broadcasts, and interviews with witnesses that use their speech rhythms to generate musical material. The sound of the quartet is multilayered to produce a 12-part ‘quartet’ texture. It’s a restrained, taut piece in three continuous movements, almost ritualised in its plainness, and tremendously powerful in effect.”

Released to mark the 10th anniversary of the terrorist attacks on the World Trade Center, WTC 9/11  collects the title track, which was commissioned for and recorded by Kronos Quartet, as well as Reich’s Mallet Quartet, performed by Sō Percussion, and Dance Patterns, featuring members of Steve Reich and Musicians.

WTC 9/11 (2010) reflects on the events during and after the World Trade Center attacks of September 11, 2001. The piece is scored for three string quartets, of which Kronos recorded all parts for the album, and pre-recorded voices, which include NORAD air traffic controllers as they raised the alert that the airplanes were off course, FDNY workers on the scene, friends and former neighbors of the Reichs (who lives four blocks from the World Trade Center), and women who kept vigil, or Shmira, over the dead in a tent outside the Medical Examiner’s office.

The relationship between Steve Reich and Kronos Quartet spans more than 20 years. This is the third quartet the composer has written for Kronos; all three have been recorded by Nonesuch.