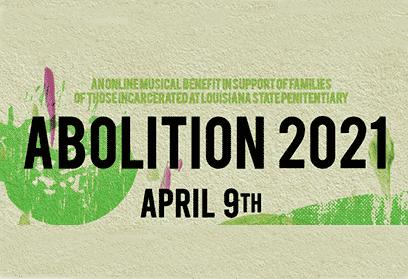 On April 9, 16, 23 & 30th, Abolition Apostles, in collaboration with Jolie Holland and Johanna Samuels, will host a concert to raise funds for a new hospitality house near the Louisiana State Penitentiary at Angola. This house will offer free lodging to the families of incarcerated people at Angola and other nearby prisons, and will serve as a hub for activists, journalists, and lawyers visiting one of America’s most notorious penitentiaries.

Kronos performs one piece on the April 9th show as part of a lineup of more than 25 artists; click here to see the full program.

The concert set featuring Kronos will be available for on-demand streaming for 48 hours, beginning April 9, 2021 on noonchorus.com.