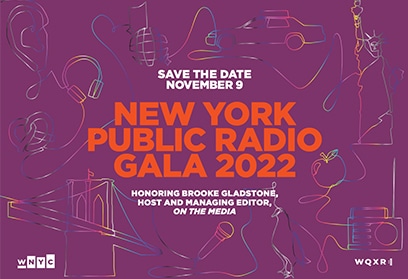 New York Public Radio – home of WNYC, WQXR, WNYC Studios, Gothamist, and The Jerome L. Greene Performance Space – will hold its 2022 annual gala on Wednesday, November 9. The evening will honor host and managing editor of WNYC’s On the Media Brooke Gladstone, one of the pioneering female voices in public radio. Samantha Bee, comedian, writer and former host of Full Frontal with Samantha Bee, will host the evening, with a musical performance by the Grammy Award-winning Kronos Quartet. Tickets & more here.

New York Public Radio’s biggest fundraiser of the year will be held at The Plaza Hotel, where it celebrated its 20th anniversary of two-time Peabody Award-winning podcast Radiolab last year with host Julianna Margulies in 2021.

This year’s NYPR gala honoree Brooke Gladstone is the host and managing editor of On the Media –  WNYC’s weekly investigation into how the media shapes our worldview. She started her career in public radio at National Public Radio in 1987, first as Senior Editor of NPR’s Weekend Edition with Scott Simon, and later, All Things Considered. By 1991 she had received a Knight Fellowship to study Russian language and history, and a year later began reporting from Moscow for three years. After moving back to New York, she inaugurated NPR’s first-ever media beat. She joined WNYC in 2000 to become host of On the Media, which under her leadership has won two Peabody Awards, was the first national public radio show to be offered as a podcast, and now airs on 425 public radio stations.