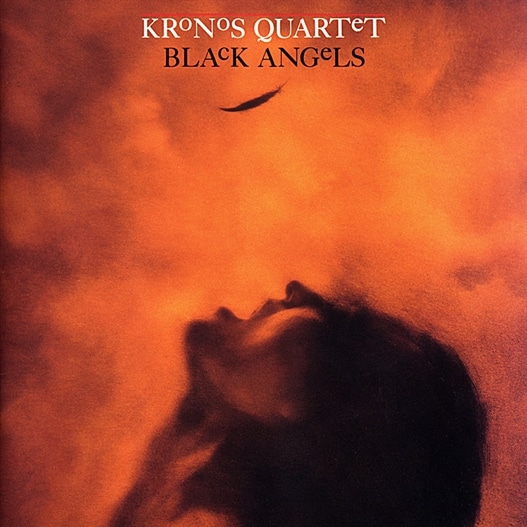 “Stylishly packaged, intelligently programmed, superbly recorded and brilliantly performed. In short, very much the sort of disc we’ve come to expect from the talented and imaginative Kronos Quartet. With an overall theme of war and persecution linking the works, the disc opens with George Crumb’s Black Angels for electric string quartet; a vividly descriptive work inspired by the Vietnam war… An intense, poignant account of Shostakovich’s Eighth String Quartet (a work dedicated to the victims of Fascism and war) brings this unusual and thought-provoking recital to a fitting conclusion. I’ve avoided bringing into play any comparisons with this performance as it strikes me that the interest and value lies primarily in the recital nature of the disc, though let me say that this performance can more than hold its own in the stiffest of competition.”

David Harrington on Black Angels: “In August of 1973, on the radio one night, I heard Black Angels by George Crumb. And for a moment the world made sense. And I didn’t have really any choice but I had to start a group in order to play that piece… It took sixteen years for Kronos to record Black Angels. And I’ll tell you the reason. I felt the group needed to learn more about the recording studio and how to make the sound kind of jump off the record or the CD right into the imagination of the listener. But even more importantly, I knew that our performance of Black Angels had to be the first track on a recording. So there’s no way you could avoid it. I was hoping that listeners would basically have to confront that piece right from the very first note that they heard. It took 16 years for me to figure out what would be the second track on the album.” (originally published by the University of Michigan)