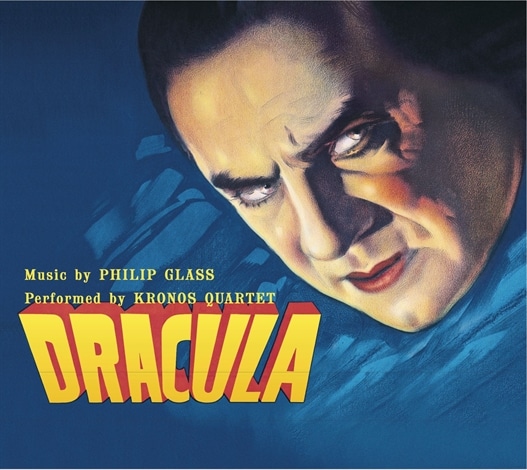 “The inclusion of the 1998 score gives the film an element of independent existence, making it a work of art free from time, space or genre… The music itself is all exquisite strings and arpeggios; yet, it is nearly devoid of fear, of horror. It instead seems to identify with the seductive, curious aspects of Dracula and draws the audience into its potentially dangerous yet irresistible web.”

In the late-1990s, Universal Pictures approached Philip Glass to compose a new score for one of its early horror films – Dracula, The Mummy, or Frankenstein – as part of Universal’s Classic Monsters home video collection. Glass chose to compose a score for Tod Browning’s 1931 Dracula, because it never had an original score (only brief excerpts from Tchaikovsky’s Swan Lake, Wagner’s Die Meistersinger von Nürnberg, and Schubert’s “Unfinished Symphony” in B minor). “The film is considered a classic,” Glass has said. “I felt the score needed to evoke the feeling of the world of the 19th century – for that reason I decided a string quartet would be the most evocative and effective. I wanted to stay away from the obvious effects associated with horror films. With Kronos, we were able to add depth to the emotional layers of the film.” Glass and Kronos have performed the music live to the film many times around the world. The album is now available on vinyl from Orange Mountain Music.

Originally released by Nonesuch Records in 1999; re-released by Orange Mountain Music in 2016