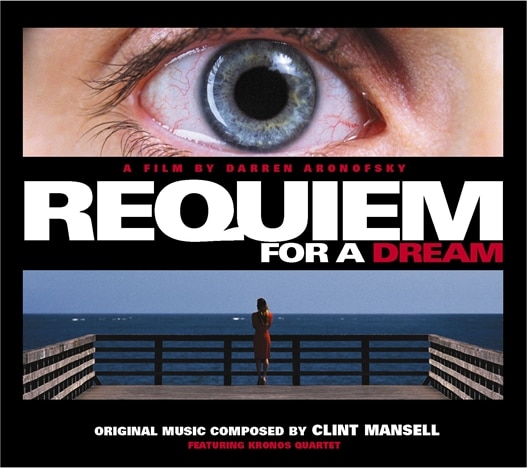 “Requiem for a Dream was the film that put Darren Aronofsky on the map and gave juicy and heartbreaking roles to Ellen Burstyn (an Oscar nominee), Jared Leto, Marlon Wayans, and Jennifer Connelly. But it’s perhaps now best remembered for its score. Written by Clint Mansell and performed by the string group Kronos Quartet, the Requiem for a Dream soundtrack, specifically ‘Lux Aterna,’ has been used to promote movies ever since.”

For English composer Clint Mansell’s second collaboration with American film director Darren Aronofsky, he has written original music for Requiem for a Dream, an adaptation of Hubert Selby, Jr.’s 1978 novel of the same name that follows four characters as their lives spiral out of control because of their addictions. The largely electronic soundtrack includes performances Mansell and Kronos.

All machines programmed by Clint Mansell

All music composed by Clint Mansell, except tracks 16 and 24 by Brian Emrich and Theodore Birkey
String quartet arrangements by David Lang