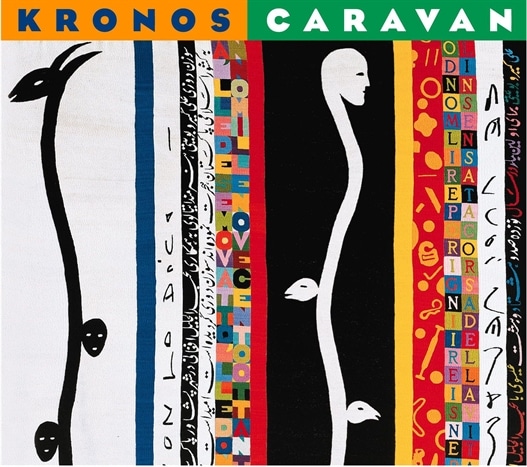 “One of the group’s most compelling and accessible recordings to date… [Kronos] is severely underrated when it comes to its dedication to premiering the works of international composers. Just about every nation has its version of the violin, and Kronos has made an effort to represent string music from every corner of the world… It’s a globe-trotting treat, like walking through a world market and being bombarded by dozens of exotic spices at once.”

Kronos Caravan is inspired by the part of the world once known as “Pannonia” – the territory that connects northeastern Europe with the Mediterranean and western Asia. This crossroads of peoples and cultures is the starting point for a collection of arrangements and compositions that includes Portuguese fados, an Indian film theme, a Romanian Gypsy theme, and music from Iran, Hungary, and the Arab world. One unifying force that serves to bring some of these seemingly disparate musical elements together is the work of Argentinean composer Osvaldo Golijov, who arranged three-quarters of the material on this album. Kronos is joined by an assortment of superior instrumentalists including Zakir Hussain, Ali Jihad Racy, Kayhan Kalhor, and others.