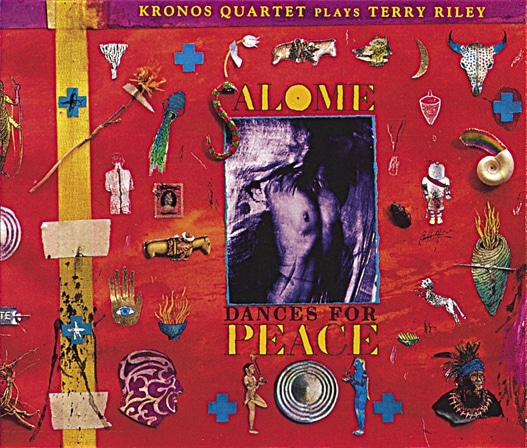 “There is no string quartet that has ever been written that can compare length and diversity with Terry Riley’s Salome Dances for Peace… Riley takes all of the musical ideas he holds dear, places them in the context of all the world’s musical styles he holds sacred, and then creates for them an allegory that has lasting implications for how people view not only history and their role in the present, but how they conduct their view of the world around them forever more. That this is done without a lyric or being autodidactic is a small miracle. That he and the Kronos Quartet have produced a string quartet at the end of the 20th century that stands as one of the most sophisticated and musically challenging in the history of Western music is an enigma.”

From Mark Swed’s liner notes: “Salome Dances for Peace is music of passing landscapes. It is a tapestry of seemingly unrelated musics; musics reflecting its composer’s passions for jazz, blues, North Indian raga, Middle Eastern scales, Minimalist pattern and traditional Western art music; styles never before found together within the framework of a single string quartet… Riley began it in 1985 as a ballet, developing scenario and music together. As the score evolved during two years of composition, the music outgrew its need for explicit staging… In Riley’s narrative, the heroine is Salome, the legendary seductress in King Herod’s court. Now, 2000 years after her famous dance, peace has been stolen from the earth by dark forces, and Salome is chosen to win it back.”

From Terry Riley’s liner notes: “I’m always trying to find ways that I can, besides doing music, contribute to world peace, or maybe neighborhood peace or home peace. I told David [Harrington, Kronos’ founder, artistic director and violinist] when we first started that I thought we ought to create a piece that can be played at the United Nations on special holidays. It would not be just a concert piece but a piece that could be played as a rite.”