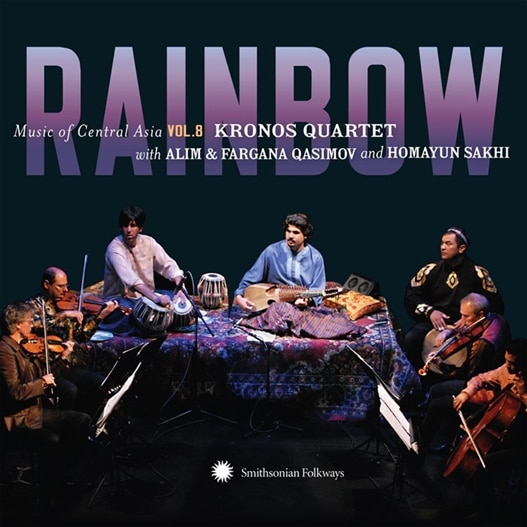 “The sharing of ideas and art is a centuries-old practice for the people of Central Asia. And it’s a more than 30-year-old practice for members of the Kronos Quartet, whose music-making knows no international boundaries. Kronos’ latest cross-cultural exploration finds the band in collaboration with master musicians from Afghanistan and Azerbaijan… Be forewarned, this new disc does not always make for restful listening. The intensity such a fevered pitch that it saps every ounce of concentration. But it’s a hazard I think you will end up welcoming, wholeheartedly.”

As part of the Smithsonian Folkways Recordings and Aga Khan Music Initiative’s ten-album set documenting the music of Central Asia, Kronos Quartet collaborates with Homayun Sakhi, a master of the rubâb (Afghan lute), and the Azerbaijani father-daughter singing duo Alim and Fargana Qasimov, along with their respective ensembles. Rainbow: Music of Central Asia Vol. 8 features a new work composed by Sakhi for string quartet, rubâb, and percussion and Qasimov’s arrangements of popular Azerbaijani songs.

Kronos met Sakhi and the Qasimovs through a partnership between the group’s not-for-profit organization, the Kronos Performing Arts Organization, and the Aga Khan Music Initiative. Since 2008, AKMI has brought Kronos together with leading musicians from around the world to compose, arrange, and perform new music rooted in regional traditions.