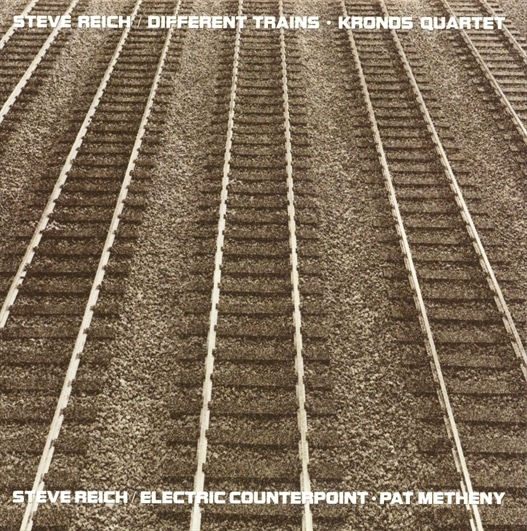 “Different Trains is Mr. Reich’s most affecting, emotional work since his anti-nuclear manifesto The Desert Music… The real drama is in Mr. Reich’s music. In the first movement, ‘America—Before the War,’ the chunky, chugging figuration so typical of Mr. Reich’s music is used to fine effect in bringing alive the locomotive cadences. But as this gives way to the central movement, ‘Europe—During the War,’ timbres darken and Mr. Reich paints a nightmarish maelstrom in music more graphic than he has attempted before. In the finale, ‘After the War,’ he finds his way to brighter textures, but takes his time getting there. Along the way, his quartet writing brushes against both Bartok and Dvorak.”

From Steve Reich’s liner notes: “The concept for the piece came from my childhood. When I was one year old, my parents separated. My mother moved to Los Angeles and my father stayed in New York. Since they arranged divided custody, I traveled back and forth by train frequently between New York and Los Angeles from 1939 to 1942 accompanied by my governess. While the trips were exciting and romantic at the time, I now look back and think that, if I had been in Europe during this period, as a Jew I would have had to ride very different trains. With this in mind I wanted to make a piece that would accurately reflect the whole situation.”

Kronos’ David Harrington on Different Trains: “Because Different Trains is performed in concert by a live quartet with three additional quartets on tape, we had to record Different Trains before we could ever play it in performance. Every other piece that we had recorded up until then we had performed and practiced for a long time. Different Trains was different. And everything about Different Trains—its boldness, its subject matter, its sound requirements—has pushed Kronos and our music into many new directions. We thank Steve for writing this masterpiece for Kronos, which has altered our work forever and has helped to reinvigorate our entire musical form. To my ears, Different Trains sounds as fresh, disturbing, and personal as it did when it was written.”