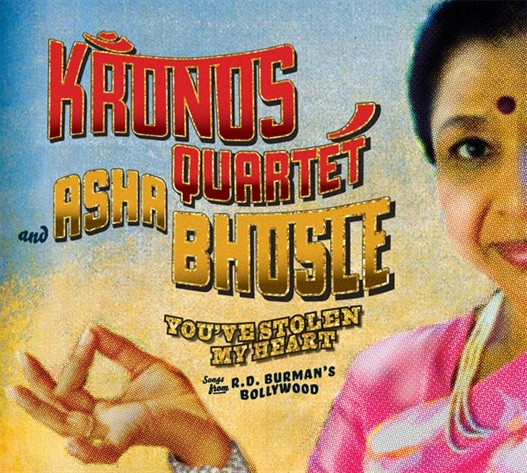 “An absolute triumph… The Kronos Quartet has been confounding purists and expectations with their commissions and collaborations for years, but this one has to be among their most adventurous yet. For You’ve Stolen My Heart, they collaborated with Asha Bhosle, one of India’s best-loved singers, to pay tribute to R.D. Burman, India’s most renowned film composer… Despite his penchant for experimentation and musical cannibalism, Burman’s compositions are no novelty. His songs are deeply melodic and beautiful, and some are so catchy you may find yourself singing along… After more than 30 years, [Kronos] continues to push the boundaries and continue to put out exciting records.”

Rahul Dev “R.D.” Burman was Bollywood’s pre-eminent film composer from the 1960s through the 1980s. The voice heard in many of Burman’s best loved songs was that of his wife, the iconic Bollywood “playback singer” Asha Bhosle. With more than 1,000 films and 13,000 recorded tracks to her credit, Bhosle is widely considered the most recorded vocalist in the world.  You’ve Stolen My Heart: Songs from R.D. Burman’s Bollywood is an homage to Burman and Bhosle, who joins the Kronos Quartet on the majority of tracks on the album. It also features longtime collaborators Zakir Hussain and Wu Man, as well as Kronos members playing vintage electronic instruments.