Stacy Garrop / Glorious Mahalia **  Bay Area Premiere
I. Hold on
II. Stave in the ground
III. Are you being treated right
IV. Sometime I feel like a motherless child
V. This world will make you think
featuring the recorded voices of Mahalia Jackson and Studs Terkel

The Board of Directors of the Kronos Performing Arts Association is proud to help sponsor this performance.

Genuine Article Pictures is proud to help sponsor this performance.

“Around the World with Kronos”
Kronos Quartet with Valérie Sainte-Agathe and guests Lee Knight and singers from the San Francisco Girls Chorus’ Bayview Chorus Program, as well as a special pre-show performance by SFGC’s Chorus School

Andrea Abernethy Lunsford is proud to help sponsor this performance.

PERFORMANCE UPDATE: The US visa for Malian artist Hawa Kassé Mady Diabaté has been delayed. We regret that she will not be able to travel to San Francisco to be part of Kronos Festival 2019. Kronos Quartet, Valérie Sainte-Agathe and the San Francisco Girls Chorus will perform the world premiere of “Tegere Tulon,” Diabaté‘s new work for Kronos’ Fifty for the Future initiative, as planned.

Anne Popkin is proud to help sponsor this performance.

Free and open to the public; first come, first served.

Filming the World, One Song at a Time: The Films of Pete and Toshi Seeger

Festival Artist-in-Residence Valérie Sainte-Agathe invites fellow artists and storytellers to the stage to commemorate and celebrate voices of change in San Francisco’s underserved Bayview–Hunters Point neighborhood. Sainte-Agathe leads a discussion with small business owner and civic leader Shelley Bradford-Bell and artist, activist and educator Heidi Hardin about the unsung advocacy work of Bayview women. Teaching artist Christopher Street will join to talk about one of the many legacies of these women – arts and education programs that continue in the Bayview Opera House. The hour-long event will also include Street leading singers from the San Francisco Girls Chorus’ Bayview Chorus Program in a short set, and a sing-along with banjo player Lee Knight to honor what would have been the 100th birthday of folk music legend and social activist Pete Seeger.

Sainte-Agathe is the artistic director of the San Francisco Girls Chorus, which she has prepared and conducted since 2013. A native of Martinique, she has received degrees from Universite Paul Valery in Montpellier, Montpellier Conservatory, and University of Montpellier. Before moving to the Bay Area, she served in various positions with the Orchestre National de Montpellier, Festival de Radio France, Opéra National de Montpellier, Opera Junior, and the Festival Presence, among others. Read her full biography >

Pete Seeger: “The World that Music Lives In”

Pete Seeger, who would have turned 100 years old this May, lived through the tumultuous 20th century as a force for kindness, humility, and good. His pursuits reflected the complexity of the times through the lens of music making and music creating. This talk will illustrate Seeger’s career and efforts for peace and social justice by using primary source materials held at the American Folklife Center, Library of Congress, where speaker Todd Harvey is a curator. Harvey works primarily with the Center’s archival collections relating to the 20th-century folk music revival, including the collections of the Seeger family, the Lomax family, Jean Ritchie, Woody Guthrie, Izzy Young, and John Cohen.

This year, the festival highlights the voices of singers, storytellers, and activists over three evening concerts, a Saturday morning family concert, and Kronos Labs, free public events that are new this year.

Each festival presents Kronos with an opportunity to unveil new work. The ensemble will debut the first part of a project, commissioned by the FreshGrass Foundation, that will commemorate the life and legacy of folk icon and activist Pete Seeger, who would have turned 100 years old this May. Kronos will also perform the Bay Area premiere of Glorious Mahalia, a work by Chicago-based composer Stacy Garrop that celebrates legendary singer Mahalia Jackson through the words and spirit of oral historian and activist Studs Terkel.

Kronos also premieres three pieces written for 50 for the Future: The Kronos Learning Repertoire: Flashlight by Stanford University composer Mark Applebaum, whose works frequently consist of both gestural movements and sound; Enthusiasm Strategies by Missy Mazzoli, “one of the more consistently inventive, surprising composers now working in New York” (New York Times); and Tegere Tulon by Diabaté, whose work is inspired by (and receives its title from) the tradition of handclapping songs and dances created spontaneously by girls in country villages of southern Mali. 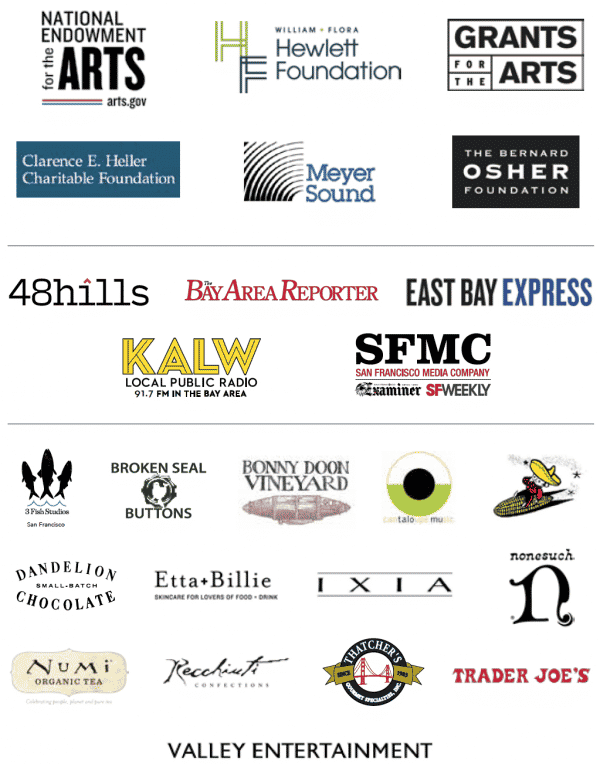 Kronos Festival 2019 is produced by the Kronos Performing Arts Association (KPAA) and is part of the San Francisco-based 501(c)3 nonprofit’s KRONOS PRESENTS program. It is made possible by generous support from San Francisco Grants for the Arts, the National Endowment for the Arts, the Clarence E. Heller Charitable Foundation, and the Kronos Performing Arts Association Board of Directors.