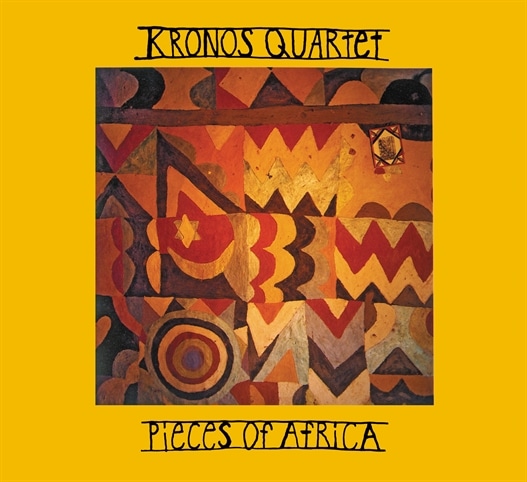 “Where on any other string-quartet performance would you find the basic ensemble of two violins, viola, and cello complemented by an exotic array of African instruments, including delicate percussion and extravagantly designed strings? Or complemented by a gospel choir? Or with solo singers? It’s all here, and the results are, mostly, sheer enchantment… The main difference between the Kronos and the rest of the chamber-music world, in fact, seems to be that — defying all traditions of string-quartet behavior — the Kronos folks always seem to be having fun. Pieces of Africa zestfully proclaims that… The record is pure Kronos: delightful, imaginative, out-of-the-way music played with the same loving care the group might lavish on a Beethoven quartet, if they ever decided to play one.”

A showcase of African-born composers, Pieces of Africa was a cross-cultural and commercial landmark: the first album to top both the classical and world music Billboard charts. Nonesuch Records reissued the album in 2016 on vinyl (2 x 140-gram LPs) for the first time.

Kronos’ David Harrington on the album: “When I really think about it, I realize that it actually goes back to when I was in the tenth grade at Roosevelt High School in Seattle. In that school’s music room, there was a great record collection that included, among other things, a number of recordings from various places in Africa. In particular, some music from Ghana really touched me… When I first heard that African music, I just thought, Wow, I want my violin to have that kind of a sound someday” (from his 2014 conversation with Jonathan Cott for the Kronos Explorer Series liner notes). “It took 20 years to establish a small repertoire of African composers for Kronos, which ultimately resulted in the album Pieces of Africa” (from his 2018 folk radio interview).