The first full recording of Sun Rings, Kronos Quartet’s 2002 collaboration with composer Terry Riley for string quartet, chorus, and pre-recorded space sounds, will be released by Nonesuch Records on August 30, 2019. Sun Rings is available to pre-order from iTunes, the Nonesuch Store, and Amazon, where the album track “Beebopterismo” may be downloaded instantly, and may be streamed at Spotify and Apple Music. Listen below.

Commissioned in part by the NASA Art Program, Sun Rings premiered at University of Iowa’s Hancher Auditorium in October 2002. The fully staged multimedia production, which features visual design by Willie Williams, has since been performed by Kronos nearly 50 times in 11 countries and 18 states. The Sun Rings album was produced by Judith Sherman, recorded at Skywalker Sound with engineer Leslie Ann Jones, and includes the San Francisco-based vocal ensemble Volti, under the direction of founder and artistic director Robert Geary. 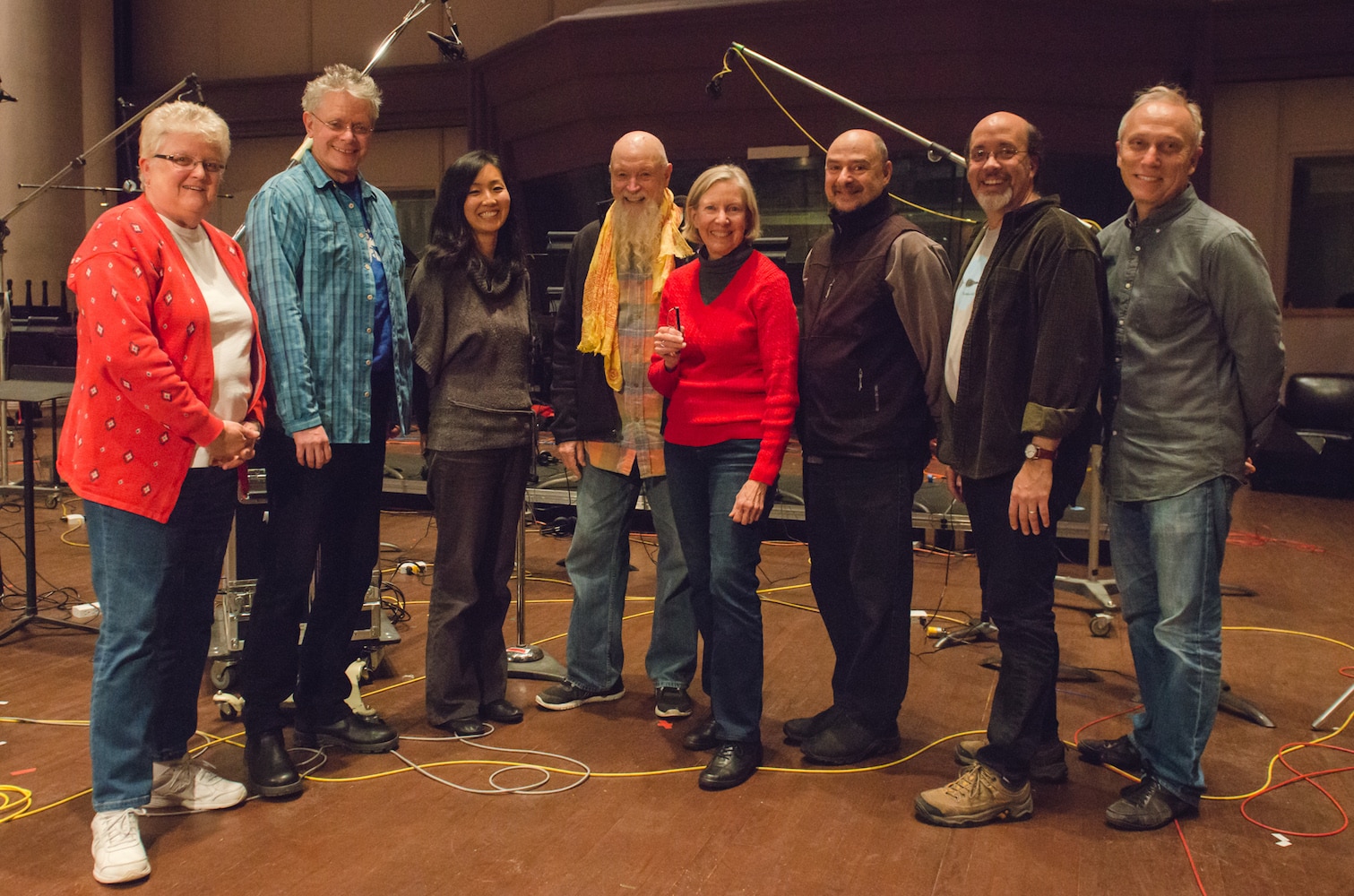 One movement from the piece—“One Earth, One People, One Love”—was previously included on Sunrise of the Planetary Dream Collector: Music of Terry Riley (2015), a compilation that includes “Cry of a Lady” (originally released on 2014’s A Thousand Thoughts), “G Song” and Cadenza on the Night Plain (from 1998’s 25 Years), and previously unreleased recordings. This release, as well as Salome Dances for Peace (1989), Requiem for Adam (2001), and The Cusp of Magic (2008), were all collected into a 5-CD box set titled One Earth, One People, One Love: Kronos Plays Terry Riley. 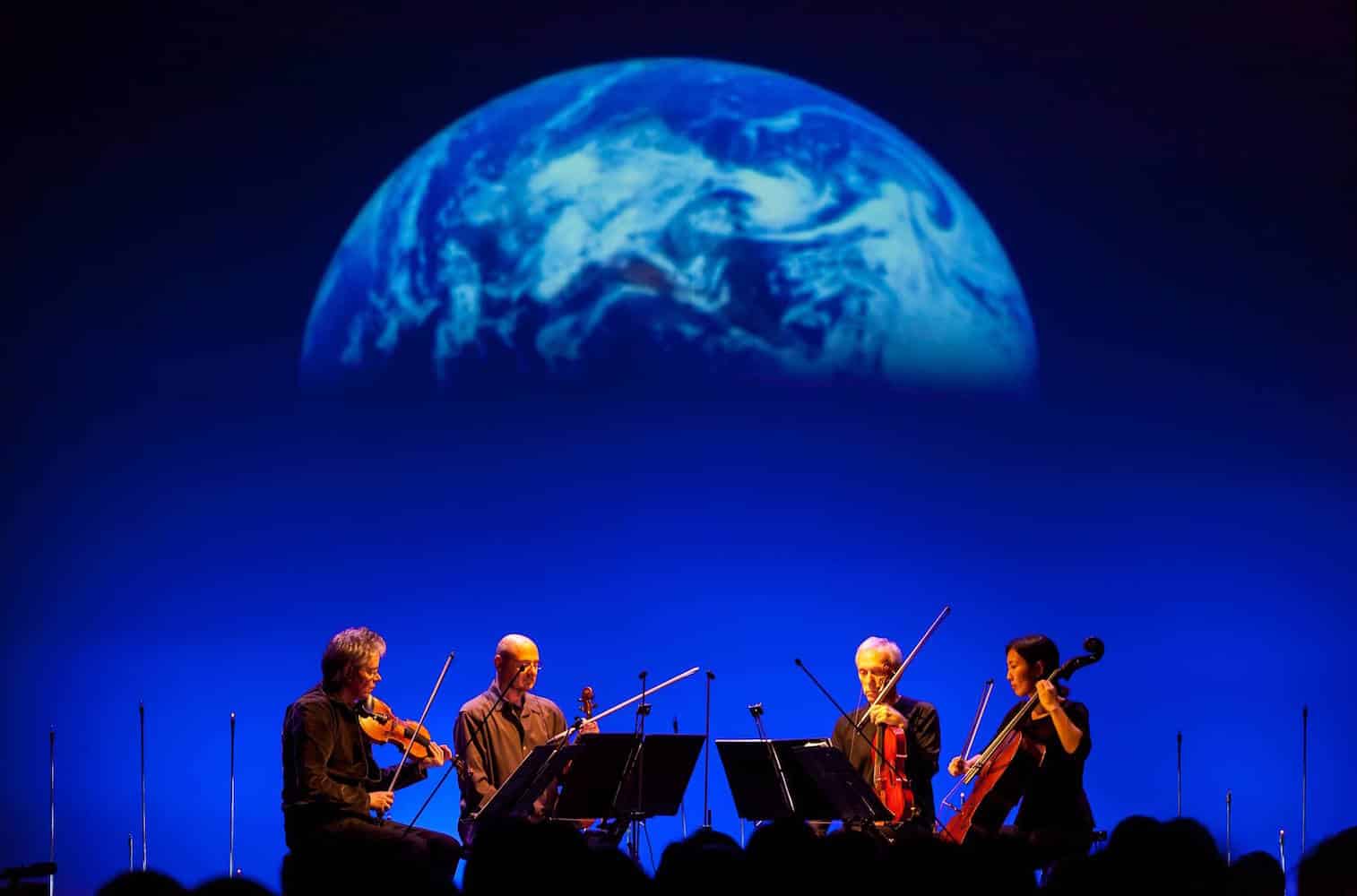 Sun Rings began with a call from NASA to Kronos Quartet’s manager. The 25th anniversary of the Voyager 1 space probe’s launch was coming, and the agency wondered if Kronos would be able to use the “space sounds” that Voyager 1 and 2, as well as other spacecraft, had sent back to Earth in its performances.

A meeting was quickly arranged between Kronos’ artistic director, founder, and violinist David Harrington and University of Iowa physics professor Don Gurnett, who had developed the plasma wave instruments that had received these sounds. After listening to Gurnett’s collection of favorite “space sounds,” Harrington says, “I instantly knew Terry should be the composer to bring them into our work.” At that point, Terry Riley and Kronos had been working together for more than 20 years, beginning with the composer’s “Sunrise of the Planetary Dream Collector.” Harrington continues, “Eventually this led to all sorts of sonic adventures in Don’s office.” 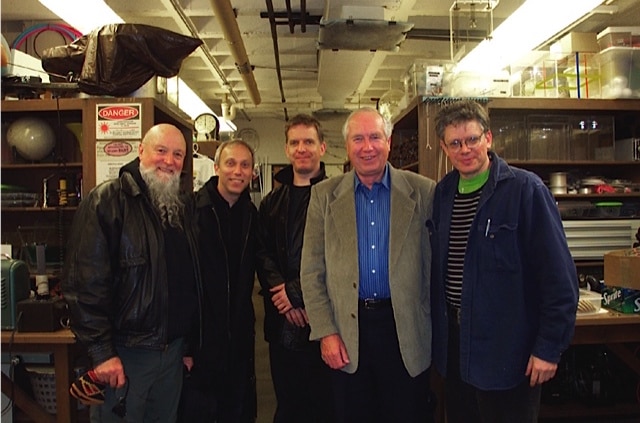 Gurnett says, “The resulting meeting was one of the most memorable in my life, as it involved a very unusual art-science collaboration between a group of musicians and myself, a scientist who had never played a musical instrument… Of course, as a scientist, I tried to explain how these sounds were produced; however, the discussion soon turned to more philosophical questions: Are these sounds musical? Can nature produce music?” In explaining the “space sounds,” or more accurately plasma waves, recorded via NASA spacecraft, he says, “Contrary to common conception, space is not a vacuum. It always has a finite density and temperature: sometimes ionized in the form of a plasma, and sometimes in the form of an electrically neutral gas. Thus, sound waves can indeed propagate in space.”

After Gurnett gave him cassettes with these sounds on them, Riley says, “I began to listen to see what kind of musical element could be buried deep within the spectrum of their mostly raw, grainy sound. There was a wide variety of sonic textures and frequencies of the different samples, often resembling both natural and synthesized sounds found here on Earth.” Many of the samples were eventually integrated into Riley’s composition. 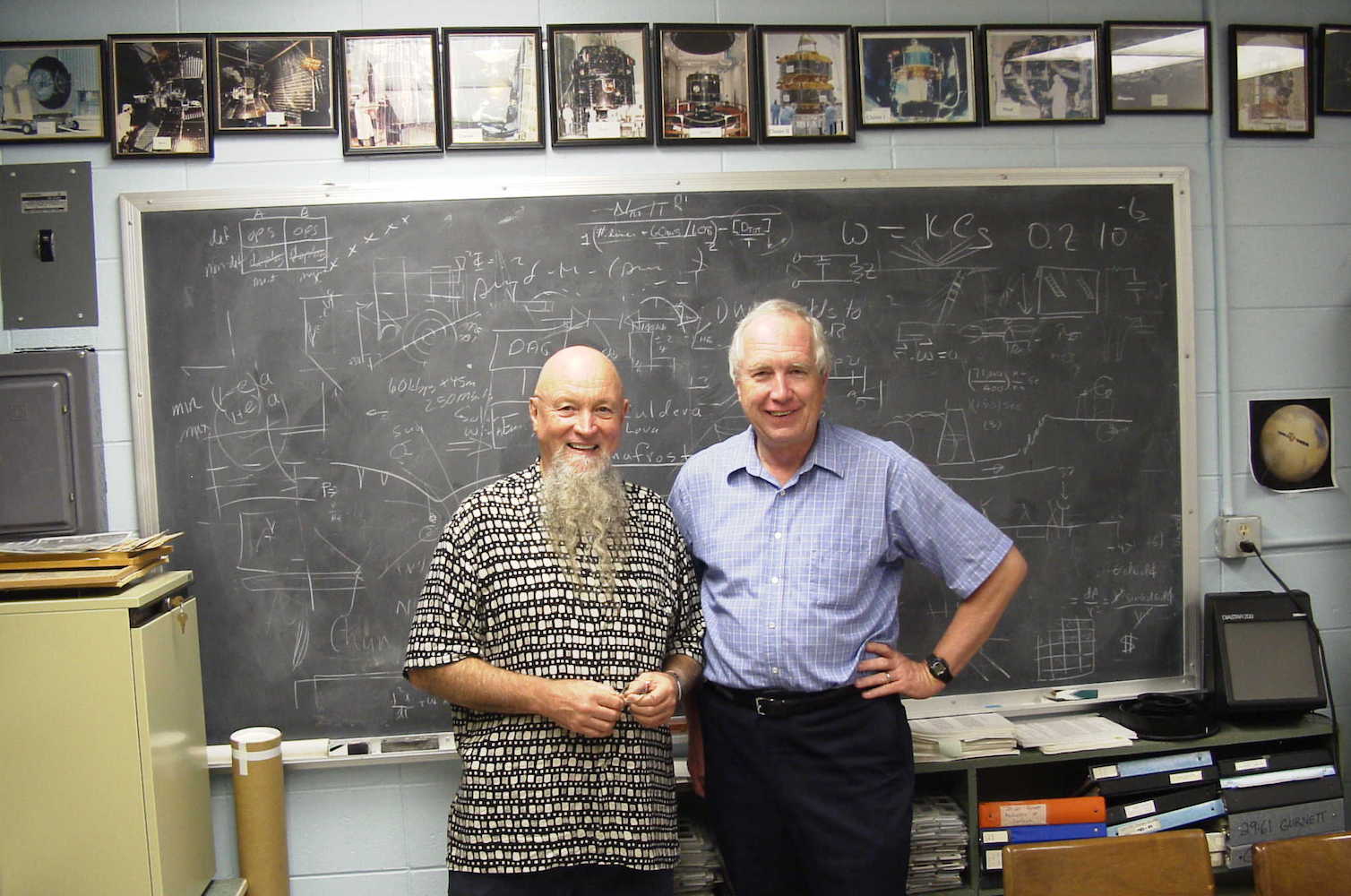 Terry Riley and Don Gurnett in Gurnett’s Office at the University of Iowa, c. 2002

The September 11, 2001, attacks happened while Riley was composing, temporarily stopping his work. He was seeking a way to incorporate meaning motivated by peaceful intentions and compassion, when he heard Alice Walker on the radio, speaking about a mantra that had helped her through the tragedy: “…one earth …one people…one love.” 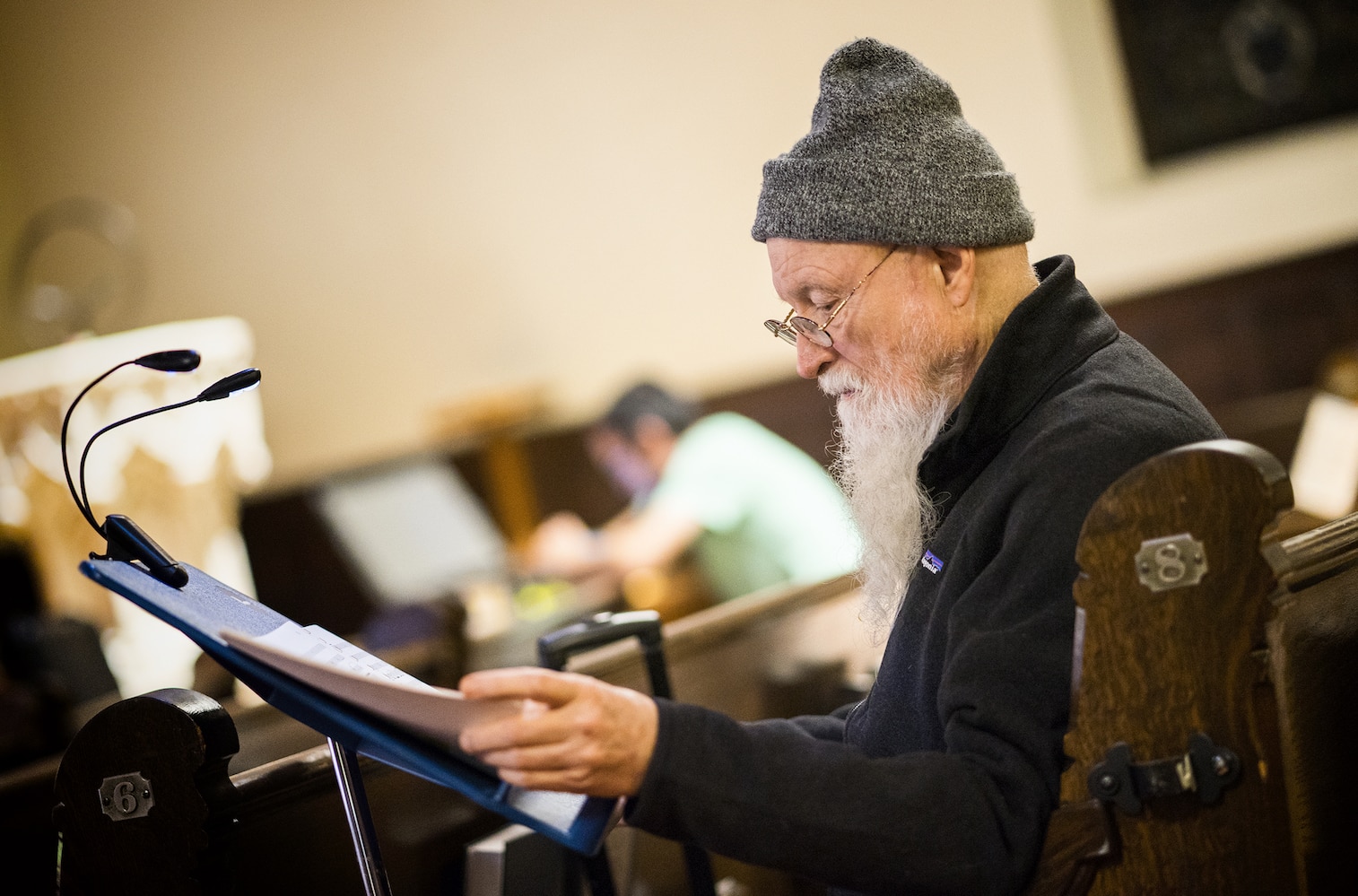 “Hearing this, I had a renewed desire to continue work on Sun Rings in the spirit of the connectivity of all things. I added a choir to two of the movements to represent the voice of humanity in its struggle to understand the meaning of our place in this unfathomable universe, and to maybe suggest that, even with our sophisticated technologies propelling us toward the unknown, we should keep in mind that ‘all you need is love.’” 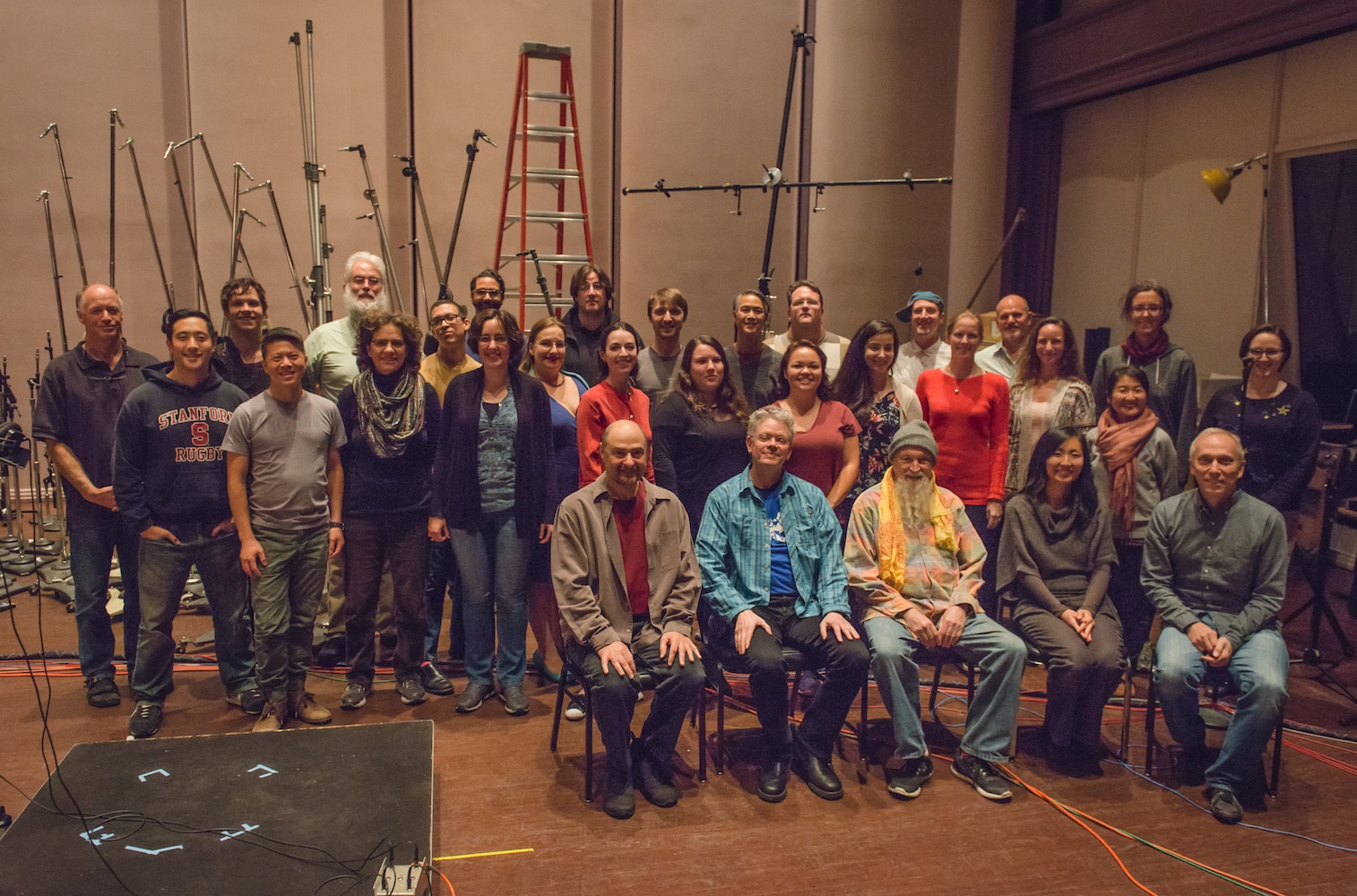 Sun Rings was commissioned for the Kronos Quartet by the NASA Art Program, the National Endowment for the Arts, The Rockefeller Foundation’s Multi-Arts Production Fund, Hancher Auditorium/University of Iowa, Society for the Performing Arts, Eclectic Orange Festival/Philharmonic Society of Orange County, SFJAZZ, Barbican, London, U.K., University of Texas Performing Arts Center, Austin (with the support of the Topfer Endowment for Performing Arts), and the Brooklyn Academy of Music.